The train arrived in Denver just about on time. I’ve quickly learned that train time is different than real time. You’ve got a 30 give on either side of the arrival which puts you in the station “on time.” I hugged my seat mate Ingrid a farewell and quickly got my uber to go to my B&B and get my car. My uber driver was a retired science teacher from Souther California (gosh, we teachers are popping up everywhere). We had great conversation as I made my way to my next B&B host with James. The arrangement process for both my B&B and car went rather smoothly. I quickly showered and brushed my teeth, the gross part of overnight train travel, and headed up into the mountains.
Mt Evans is the highest paved roadway in America. I kept hearing snippets that if you’re scared of heights don’t go, the uber driver, people on the train, random strangers. I am not a big fan of heights and it’s something I am challenging myself to get better with, so I ignored the advice and headed up in my little stick shift rental car.
It took about 2 hours to make the 50 mile trek from Denver. I stopped so many times to take pictures and capture the views. It was a partly sunny day. The sun would just peak it’s head through the clouds which were all around us.
Once I was at the top, I parked my car and joined the 100 other people that were making the last 500 foot trek on a zigzag path up to the marker at the top. The altitude sickness, a real challenge. Several elderly people sitting down and resting quite often. It’s an interesting thing because it reminds me of when I have a severe allergy attack and can’t breath. I noticed I would hold my breath as a reaction and had to really think about a steady stream of breathing. I sat down and had my lunch in a majestic and unbelievable place. I helped others take pictures and everyone is friendly and curious where you’re from. The Red Sox hat gives it away for me.
After lunch and a few more pictures at the top I decided to head down the mountain. The clouds were rolling in a bit more and the wind started to pick up. I stopped at the lake on my way back down and that’s when the thunder and snow begin to happen. Yes folks, the wind picked up and the snow started to fall at 2pm on August 3rd. Normally I hate the stuff but there was something great about seeing snow in the middle of August and knowing that I would go back down to warmer temps at the bottom of the mountain.
I headed on to my next excursion through route 6 and Golden CO instead of traveling interstate 70. This road goes between mountains following a little river and has tunnels. It was a scenic alternative as I drove through the rain to Red Rocks.
I was early to Red Rocks so I walked around and saw the Colorado Music Hall of Fame and took tons of pictures. It was raining rather hard so we were all hoping it would stop. I was in luck because at 6:30 the clouds moved away and we had the most beautiful evening light as we waited to get in to the venue.
I had dinner reservations at the Ship Rocks Grille. It’s nothing special for a restaurant and it was too cold to eat outside. It only was in the low 60s today. I ate my dinner which I had the Bison Chili (hey, when in Colorado) and then went to the bar for a pre-concert drink. I met a couple from Indiana there to cross this experience of their bucket list. We chatted for a while until I heard over my shoulder, “New England huh? “ I replied, yeah the Red Sox cap gives it away. She said, “actually I didn’t notice that, it’s your L.L.Bean backpack.” I had never thought about that being a New England thing but it was a dead give away to another Boston Native. I befriended a few new Massachusetts natives then and ended up watching the show THE HEAD AND THE HEART with them.
Red Rocks is an experience anyone who loves music must do. The venue is just gorgeous and it is like no other experience I’ve had.
I left the concert a few minutes early as I didn’t want to get stuck in traffic leaving and had already been going since 5:00am.
This was such an amazing day and was exactly what I was hoping for on this trip. Tomorrow a low key day in Denver. 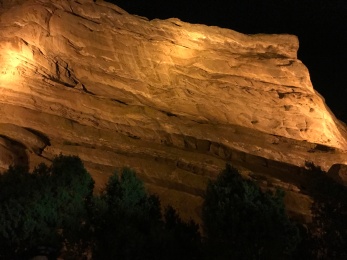 Media, music and thoughts…oh, my!

A channel that has content to support early reading literacy through technology and music, creative ways to access music notation, integrated arts connections and personal performances.